I have been using the last week or so to learn the ins and outs of Node.js and MYSQL. I wanted to put together a little project that would use the two to create an app that would create and interact with a database through a user interface. I decided to put together a simple example making a student database for a college. Since I can’t use a database through GitHub pages It’ll only be done locally, so there won’t be a live demo. I’ll provide pictures and the code through GitHub to show the results.

This app will use node, express, ejs and other modules to put it together. I’ll use MYSQL to create and maintain the database and Bootstrap to create a simple style.

To start I’ll create a database locally using MYSQL. I will call this database my_school.

I'll start out the table within the database, and to test the results later, I’m going to use a program PopSQL to help visualize the table better, once information is added. To start I’ll make a table called ‘students’, and enter in the columns needed. 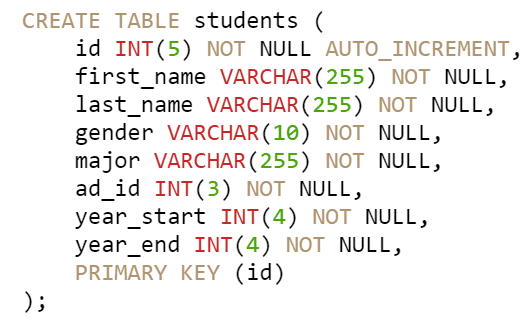 It was a success! I’ve added some data to the table so we have something to look at once everything is set up.

So now that the database is all set up, it’s time to set up node. I’ll need to use install some modules like express, MYSQL and body-parser to parse the form responses into JSON. I created app.js to configure the database and the server which will display the page.

Next, I’ll set up the home page so that it’ll display the current students and give the option to create edit or delete entries to the database. I’m using ejs as the templating engine to display the information.

I created a function called getHomePage in index.js that displays the home page and all of the data entries. Ejs then uses the template that’s connected to app.js using a loop to display all of the entries.

Now I need to do the same thing to display the page that displays the form for your info to put into the database then create the query that adds everything into the correct column in the table. I’ll make a new student to test it out.

After some struggling it worked! I had enctype="multipart/form-data" in the form tag from the html that wasn’t letting the body parser parse through the json. Every form item returned undefined. But I found the problem. Now I’ll just repeat the steps for the edit page as well as create a way to delete entries.

I can now delete and edit current entries in the database!

I now have a fully functional nodejs app that can add, edit and delete entries in a database directly from a user interface. This was a fun little project to put together. I may add some features in the future, like password protection and teacher and advisor tables.

Here is the github repo, if you want to look through the code!